Posted by Kate, who is becoming Vala or Aeryn (depending on the day) ⋅ January 24, 2012 ⋅ Leave a comment
Filed Under  costume, powers that be, qetesh, throne

One never knows what to make of it when your husband drives you out to a large storage unit and says your Christmas present is inside.  Actually, he did wrap the COA (certificate of authenticity) and put it under the tree for me, but I didn’t quite comprehend the size of the gift until he rolled up the door and a giant throne was starting back at me.

Remember that episode is season 9 of SG-1 called ‘The Powers That Be?’  You know, the one where Vala impersonates the goa’uld Qetesh on P8X-412?  If you remember, she was sitting on a throne during that episode and now that throne was before me in our storage unit.

Photo on the left from the Propworx auction, photo on the right is a screen cap from Gateworld.net 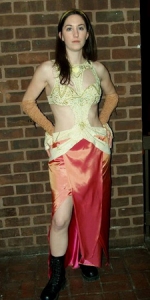 The first time I wore the costume, at 'Farpoint' several years ago.

I’d done this Qetesh costume several years ago (thanks for the inspiration Zippy!) and will now be doing a full redo when I can find materials I like for it.  With that said, of course I ran over and took a few pictures of me in the current costume with the throne (you’ll have to excuse the funny cropping on the throne  photos, I used a gorilla pod and the hood of my car for pictures).

The throne is a pretty neat piece of work.  It’s made of wood, but painted so it looks like stone.  It had to have several layers of paint to give it the desired look and I’ve been told by the people who helped move it that it’s not so much heavy as it is extremely awkward.

So for right now, this unique piece has a cozy home in a storage unit until we have the right place (preferably with large double doors or something like it) that will accommodate moving in the base of that with out us having to cut it down.  Guess that will be a prerequisite when we buy a house – can we get the throne in! Haha.

Since I have a husband that thinks I’m worthy of a throne, I guess that makes me a queen then, right?  😉  Ryan never ceases to amaze me with some of the things he finds.  It’s a good thing we’re both geeks and can appreciate these pieces.  I hate to imagine what could’ve happened to some of the pieces from the shows if people hadn’t ‘adopted’ them.  I hate to think of what’s been thrown out or destroyed because someone didn’t know what it was.  It is neat to know you have a piece of history from such a great show though.

About Kate, who is becoming Vala or Aeryn (depending on the day)

I'm a costumer, seamstress and new Mom that enjoys the challenges of recreating costume seen on screen, as well as wearable garments. There's lots I could tell you about myself, but we'll save that for another day. ;-) (aka: HothGirl)
View all posts by Kate, who is becoming Vala or Aeryn (depending on the day) »
« My Birthday Suit
And for my next trick… »